Coconut, one of the most important Hawaiian plants.

The coconut, niu, is a uniquely life-giving tree for humans, a mainstay if you live near a tropical coast. It produces the only seed that we can open to drink vital water, eat nourishing nut-meat, and even make healthy oil. The coconut palm’s fronds, trunk, and fruit all have many uses. “Every part of the plant plays its role in the Polynesian lifestyle,” says Momi Subiono, a Hawaiian ethnobotany educator from Kona.

“Kanaka maoli cherished the tree for its uses for weaving. The stump is used to make drums, the shell of the nut used as a vessel to hold liquid. We brought it with us through migration so it was very very important to us. At every stage of the tree’s life it is used for different things. Baskets for steaming things in the imu, netting for use as a strainer or for firemaking.”

Here we will focus on the fruit, and specifically how to choose a coconut for the purpose you want -- whether that is to drink a coconut full of sweet water, chew the delicious meat, save up some flakes, make some coconut milk, , or press some oil.

To understand how to select a coconut, it helps to know a little bit about the plant. 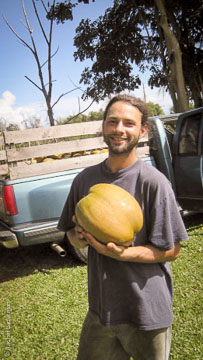 Yuri Zharow, a student of agriculture at UH Hilo and a coconut aficionado, shows how to check the pico to tell the age of a coconut.The coconut tree, Cocos nucifera, is in the palm family, and the fruit is actually a drupe, not a nut. Each coconut is made of an outer husk around a hard brown shell that protects the inner seed,or endosperm. The tough husk, made of useful fibers called pulu niu, or coir, makes the coconut buoyant so it can float to its favorite place to grow, along the shore. (Often after being picked up by a human and purposefully planted!)

At a few months of age, the green coconut is full of clear coconut water. As the coconut matures, the endosperm thickens, becoming coconut meat, and the water gradually dries up. The meat continues to get firmer and thicker and also more oily. The outer coconut husk starts to turn yellow and, in around 15 months from the time it flowered, it turns brown and the coconut falls off the tree.

After falling, an embryo embedded in the thickening endosperm starts to grow. The endosperm dissolves, and is absorbed by the embryo, which uses the sugars and minerals to grow a shoot. A spongy mass (called the sprout, or the coconut apple) starts to form inside the coconut, and if you have ever tried eating this, you know it is a crunchy, sweet delicacy -- unless it is too old, at which point it tastes soapy.

The shoot will eventually sprout through one of three “eyes,” thin areas in the husk that are handy for poking through, with a sharp tool, to get to the water (one of the eyes is easier than the other two, which are considered “plugged.” For illustrations, see the Wayne’s Word reference). The embryo will also send out a root that pushes down through the husk.

Here’s a guide to selecting the coconut for the use you want.

For water: Coconut water, noelani or “dew from the sky,” is valued as more than water, as it contains electrolytes similar to the benefits people get from drinking sports-drinks. “The water is pure and not infringed on by the air,” said Momi. “It is very healthy and it has even been used as a replacement for a blood transfusion. That is how powerful it is.” Women are encouraged to drink it when pregnant and nursing so their milk will provide all the nutrients necessary for a healthy baby. To get a coconut full of water, pick one that is immature, but at least 5 months. It will still be all or mostly green. When you hold it, it feels heavy because it is full of water, so full that shaking it you won’t hear a sloshing sound. Check out the stem end -- if it is poking out, there is all water inside and no meat. 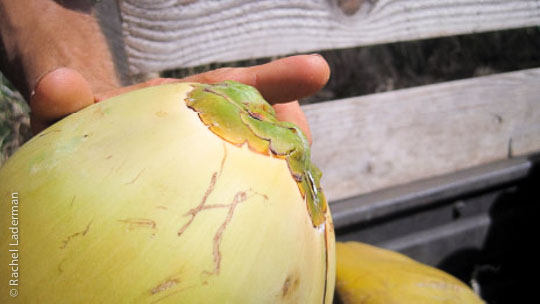 A young coconut full of water has a pico that is still pointing out. 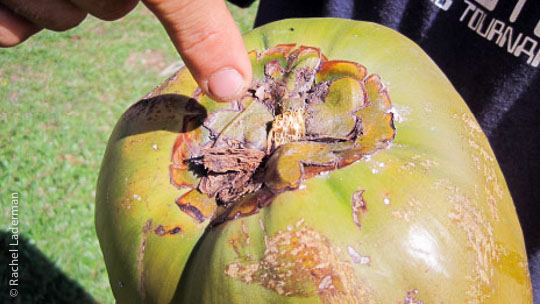 On this older coconut, the pico is a little pulled in; it will have water but also some meat inside. 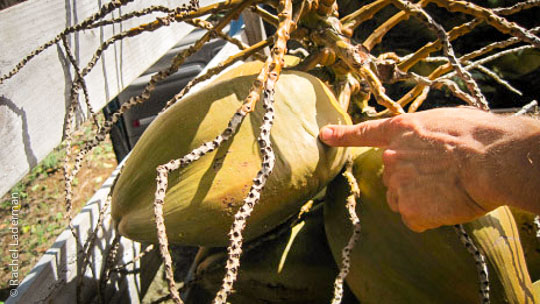 Another sign of an older coconut (both water and meat) is when wrinkles appear.

The young coconut has sweeter water, gradually losing sweetness and becoming more oily as the coconut ages/matures. You may even find one in an early stage of fermentation that tastes lightly carbonated.

For spoon meat (`o`io): The soft immature coconut meat, called jelly or spoon meat, is found in a green nut. Traditionally this and coconut water are the first foods an infant receives as it begins weaning.

For coconut milk/cream: Coconut milk is made of blending up the coconut meat and squeezing the liquid out of it. That is the richest form. It can also be blended with the coconut water or regular water. Coconuts at many ages of maturity contain a blend of water and meat. The greener the coconut, the younger and sweeter the water and the softer the meat. A little yellow on the outside and a few wrinkles should hint at ample meat as well as water inside. Look for the stem end (pico - the navel) to be pulling in (see photo). As the coconut matures, the embryo begins to pull in the end of the coconut, so the deeper this pico, the more mature the coconut (and the more meat vs. water inside).

For meat: To eat fesh coconut meat, to add as chunks to cooked recipes, or to dry for flakes and flour, you want a slightly older coconut where the meat layer has thickened. Look for yellowing outside with puckers and wrinkles in the skin and a pico that is well pulled- in. When shaken, you may hear sloshing, but the water in these coconuts may have soured -- taste it before using!

For oil (mano’i): The oiliest coconuts have a husk that is brown to silver, feels light when you pick it up, and may have already dropped to the ground. When the water has all dried out, the meat peels right off the shell. The flesh becomes grey and oily, and it may have an “apple” forming.

For planting (malo’o): The old grey-silver coconuts are the ones for planting. “At the proper elevation, it doesn't need much care,” says Momi. “Most trees sprout from the nuts on the ground. They don't even have to necessarily be buried. People do in their gardens but many coconuts grow very easily under the tree. At the right elevation it fruits readily.”

Canoe Plants of Ancient Hawaii says “Traditionally, a coconut palm is planted at the birth time of a kama`aina. The tree bears fruit around the seventh birthday, for up to 70-100 years, providing food for a human lifetime. There may be up to 50 fruit a year. A he`e, octopus, was often planted in the bottom of the hole, furnishing fertilizer and giving the plant the idea of roots that spread and grip, and a body that is fat and round.”

In summary, any stage that you open it, from young jelly to firm flesh, niu has a good use! So go ahead and wahi ka niu - break open the coconut!

Rachel Laderman moved to Hawai'i Island four years ago to farm and live off-grid in a small community of friends and family. Before this she worked for 20 years as an Environmental Health Educator in Olympia, Washington. She feels extremely lucky to be able to spend her days planting, foraging, and preparing foods. Read her blog at http://marketlessmondays.wordpress.com/.